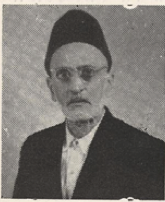 aji Ali Muraj was born in 1903 in Merca (Mogadishu). After pursuing the basic education and attaining religious knowledge he then learnt Italian language and joined his father’s business.

He got married in 1925. From this wedlock he was blessed with 6 sons and 2 daughters.

Just after his marriage he established his business which flourished quite well.

As a businessman he also liked travelling. In 1932 he travelled throughout East Africa, Mumbai, Karachi, his home town Kutch Kapaya, Iran, Iraq, Hijaz including Hajj as well as Ziyarat of the 14 infallibles. In 1956 once again he performed Hajj and 14 infallible Ziyarat.

From 1936 he served for 15 years as the President of Khoja Shia Ithnasheri jamaat’s Madressah and for 7 years he served as a committee member of the Madressah. During his tenure, for the benefit of Madressah he bought 4 properties worth Shs. 100,000/=, whose value increased over a period of time. The monthly rent income was Shs. 3,500/= which was utilized for the Madressah. On request, the properties were then handed over to the Jamaat for Madressah purpose.

Since the establishment of Ithna-Asheri School in 1949 Haji Sahib took good care of the School which he was involved up to 1958.

For 35 years he had been delivering sermons on the tragedy of Imam Hussain (a.s.) to the Mogadishu Jamaat. He was took part in the Kafan & Dafan of the deceased members of the Jamaat.