Alibhai Hirji was born in Kha 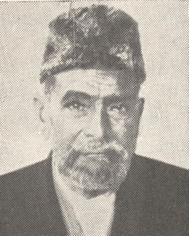 kherda in 1880. At the age of 14 years he accompanied his father to Majunga, Madagascar, here he stayed for a while and then moved to Tuleyaar (Madagascar). He joined his father’s business. In 1912 after his father sadly passed away and therefore he had to take up the responsibilities of the business and the family.

Due to many hurdles and facing the challenges of life he did not get the chance of pursuing education. Despite of this, he understood well the value of knowledge thus he took great interest and supported his family’s children to secure best education. He would spend more on education than on any other necessities of life.

In addition to shouldering all the family children education and other responsibilities, he would always take interest towards education development.  Alhaj Alibhai was one of the founder members in establishing the first school in Tuleyaar. After the establishment of the school he served for some few years as a Secretary of the school and he was in the forefront to contribute in anything to do with school or education. Moreover, he extended his services in the day to day running of the new Tuleyaar School as well as the funding of the school.

In 1947 he wound up his business in “Tuleyaar” and decided to go and live in “Tananarive”. During his stay in Tananarive, he regularly participated in the community activities.

Alhaj Alibhai has a soft corner for the needy and poor people. As he had experienced a hard times in his childhood, he always made efforts to fulfill the desires of such people.

He was a great support behind the construction of the Imambargha in Tananarive.

After the demise of his two wives, he again married for the third time. From the three marriages he had a total of eight children who by the grace of Almighty (swt) got married in their youthful periods.

Suddenly on 12th June 1959 he passed away in Tananarive, the Indian communities In Tananarive were aggrieved on his demise. He was remembered by many and has left a gap at the time which was difficult to replace.