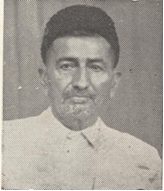 aji Kassamalibhai Esmail Ebrahim Dossa was born in 1890 in Mumbai. He studied in Khan Habib School for 7 years in Gujrat. There, the religious teaching was being undertaken by Mulla Qader Hussayn Saheb such as Quran as well Urdu classes.

The first stone of Ithna-Asheri Masjid was laid around 1901 in Mumbai. In order to accomplish this noble task the Ithna-Asheri brothers went through a tough time where some lost their lives. At that time Mulla Kassimalibhai was a resident of Mumbai. He left by Moghul line “Hussayni” steamer in 1907 and reached Mauritius after several days of sea journey. He worked for 2 years for a Memon businssman. He then worked as a broker/agent of “Kariyana”. (Food stuff)

1n 1910 he visited Mumbai again and returned in 1911 to Mauritius. He then married an Indian Muslim daughter. The marriage was solemnized by an Aalim of Ahle Sunnat as there was no Shia Aalim available there during those days. (He continued to work as an agent up to 1930. In 1931 he decided to establish his own business of Kariyana (food stuff) which he was running well for quite a long time.

In 1920 Mulla Saheb visited Mumbai with his wife, a son and a daughter. Over there his wife delivered a baby girl but unfortunately the baby passed away during infancy at the age of 8 months.

In 1921 Kassamalibhai together with his wife and both children returned to Mauritius. By the grace of Almighty (swt) he was then blessed with 4 more daughters and 5 more sons whilst residing in Mauritius.

Four of his daughters were married of whom three are residing in Mauritius with their husbands and one is living in Karachi. His two sons are married one in Mauritius and the other married a girl from Bhavnagar. (India)

He obtained religious education from Mulla Qader Hussayn Saheb. He is a staunch follower of Ahlul Bayt (as) and kind hearted too. He served sincerely for many years. When members increased, a Jamaat was then established in 1960 and in the election Mulla Kassamali was elected as the first president of Mauritius Jamaat.