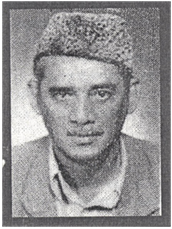 M HAJI GULAMABBAS KASSAMALI BAHADURALI MAWJI
1919-1970
Haji Gulamabbas was born in Mombasa in 1919, had a formal education for only two years. However with perseverance, he acquired enough knowledge to be able to fluently read, write and speak Guajarati and English and was at ease whilst conversing in Urdu and Kiswahili. He also showed deep interest in religious education and developed close friendship with Mulla Mohamed Jaffer (father of Alhaj Mulla Asghar) and Haji Alibhai M. Gulamhusein (a teacher at Hussain at night School).He conducted a small business in old town of Mombasa which became the hub of activity during the nights of Mahe Ramadhan where religious discourses would be held under the banner of ‘anjuman-e-saa-e-meen’ (‘group of those who fast’) led by Mulla Mohamed Mulla Jaffer and  chaired by Haji Mohamed R. Valli. In the last decade of his life he joined Gulamhussein Rehemtulla Walji as partner in the business of insurance brokerage and both then embarked on welfare activity in the community.
CONTRIBUTION TOWARDS THE COMMUNITY:
On the socio-welfare scene, initially he joined Ithna-Asheri Volunteer Crops and later on he became a active member of the managing committees of Ithna-Asheri Young Men’s Union (established in 1945) and Mombasa Jamaat. As a delegate and councilor representing Mombasa Jamaat, his  presence was recognized at the meetings of the Federation of Khoja Shia Ithna-Asheri Jamaats of Africa and views and opinions expressed by him eloquently and in a soft but emphatic tone were given due importance.In 1953, together with Mulla Gulamhussein Datoo (Bishon) and Mulla Mohamed Mulla Jaffer, he floated the idea of inviting reputed Ulema to recite majalis in Mahe Muharram and also as resident Aalims. This resulted in the visits of Mullah Jaffer Hussein, Allamah Rashid Turabi, Syed Mohammed Naqvi, Syed Mohammed ljlal Khwaja Mohammed Latif Ansari and other leading Ulema from sub-continent as Zakereen during Mahe Muharram and as resident Aalims.From 1960 to 1970, he dedicated almost all of his time in serving Faiz-e-Hussein the then subsidiary body of Ithna-Asheri Young Men’s Union (formed in 1945 to cater for the needs of Hajis, Zuwwar, other travelers, the sick and the poor). He extended the services of Faize Husseini to Nairobi whilst accompanying patients to Nairobi for medical treatment.

At the time of revolution in Zanzibar in January 1964, while attending the funeral of Haji Ebrahim Hussein Sheriff Dewji (the then Chairman of the Federation of Khoja Shia Ithna-Asheri Jamaats of Africa) he displayed the qualities of able leader in organizing distribution of food, medicine and clothing to the affected people during those traumatic times. He stayed in Zanzibar for almost a month and gave praiseworthy support to the community who were affected in the aftermath of the Zanzibar Revolution.

A MILESTONE IN MOMBASA JAMAAT
In 1966 he brought up the idea of amalgamation of the two Jamaats in Mombasa. Having mobilized the youth of both the Jamaats. This noble idea was immediately welcomed by Chairman of the Africa Federation Haji Mohamedali Meghji and Alhaj Mulla Asgarali M.M. Jaffer (who was at time Hon Secretary of the Africa Federation) resulting in the dissolution of the two separate Jamaats on 18th October 1966 and formation of a single Jamaat on 28th October 1966.  Haji Gulamabbas was elected as a managing committee member of the amalgamated Jamaat.

HONOURS AND RECOGNITION
The Federation of K.S.I. Jamaats of Africa awarded “Husseini Medal” to him for commendable services and that also after much persuasion he accepted it.

He breathed his last on Friday 23rd October 1970, at the young age of 52 leaving a lasting impact on the community having earned the title of “Abul Ghuraba” (father of the needy) from the public at large.

To honor his service to community Mombasa Jamaat established Memorial Trust of “Haji Gulamabbas Kassamali Bahadurali on 24thOctober 1970. The proceeds of which are being utilized for academic and welfare needs through Faize Husseini.