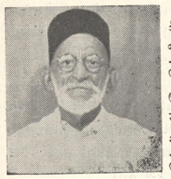 At a young age of 14, Haji Dharamsi Ladha together with Kassamali Ladha left India on a voyage by sea via Zanzibar and reached Majunga (Madagascar), where he got involved in business.

His interest in religious affairs was quite deep and as a youth he used to accompany and get guidance from Allama Haji Gulamali Haji Esmail Saheb and Mulla Kader Hussain Saheb. Moreover through Nathubhai Premji’s influence Haji Dharamsibhai became a good Zakir and had a good oratory power.

He went for hajj (Pilgrimage) in 1958. On his return he handed over his business to his five sons, and concentrated more on religious activities as well as community services.

He had a family which consisted of 17 grandchildren and 12 great grandchildren. During those days the main means of travel was carried out on foot. The travelers crossing by the rivers used the “Kayak” (Noka)

In 1908 Dharamsibhai’s brother of Kassamlibhai traveled to a small village of Maryata to establish a business. Kassamalibhai, his wife, son and 2 daughters with a cook crossed the river in a Kayak (Noka). Sadly, due to a heavy storm the kayak capsized, in this accident only Kassamalibhai and his son survived, the rest of the family died.

Now then the search began for the owner of the golden ornaments. Ultimately they found out that the ornaments belonged to the family of Kassamalibhai and was handed over to him.